What have NUS Toddycats been up to? Mangrove cleanups, habitat enhancement, workshops and talks!

Posted on Thursday, 23 September 2021 by otterman | Leave a comment

What have NUS Toddycats been up to? We’ve been busy with 20 small group or online events over these past three months!

In the second quarter of Jul – Sep 2021, we were online until distancing measures eased to allow field work in groups of five. Then  we could resumed small group action. And so, over the three months, we conducted: 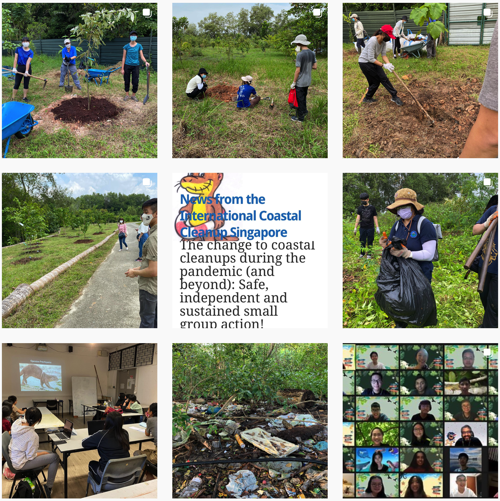 We formed a member’s Telegram channel for notification of events as field events have limited spaces, so are advertising less publicly. To get involved, join us!

For a visual impression of what w get up to, see #nustoddyats on Instagram. Visit our Facebook page at https://fb.com/nustoddycats for news of events by us and our friends too!

Posted on Wednesday, 24 February 2021 by otterman | Leave a comment

What is Sapling Protection Action?

Why we do it?
This is part of NParks’ exciting coastal restoration plan at Sungei Buloh Wetlands Reserve at Kranji Coastal Nature Park. Coastal vegetation were mostly cleared by settlements and reservoir construction by the 1970’s. With the extention of SBWR to the western edge of Kranji reservoir in 2014, this is an opportunity to practice habitat enhancement: soil preparation, tree-planting and sapling protection.

How do we participate??
Join is for the next session on Sat 27 Feb 2021. You will receive details about where to meet, your Team Leader and attire (long pants and covered shoes). We will provide gloves (bring your own if you have them) and tools. LImited spaces due to COVID-19 mitigation. Register on Eventbrite at https://tinyurl.com/kcnpspa-27feb2021 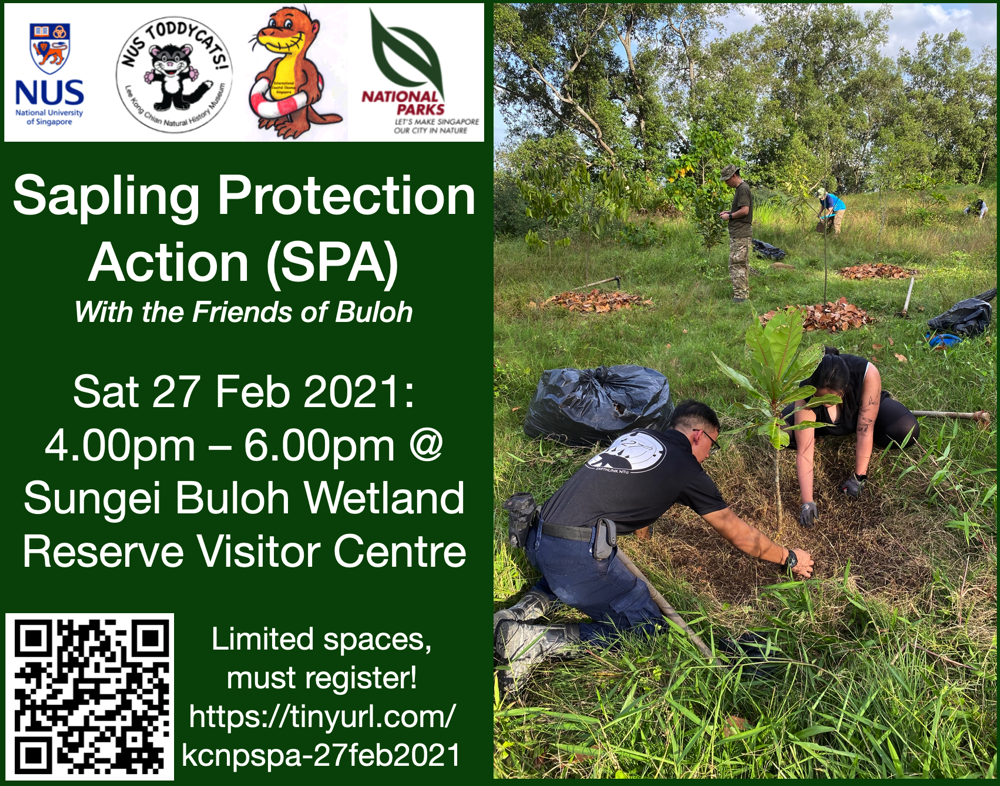 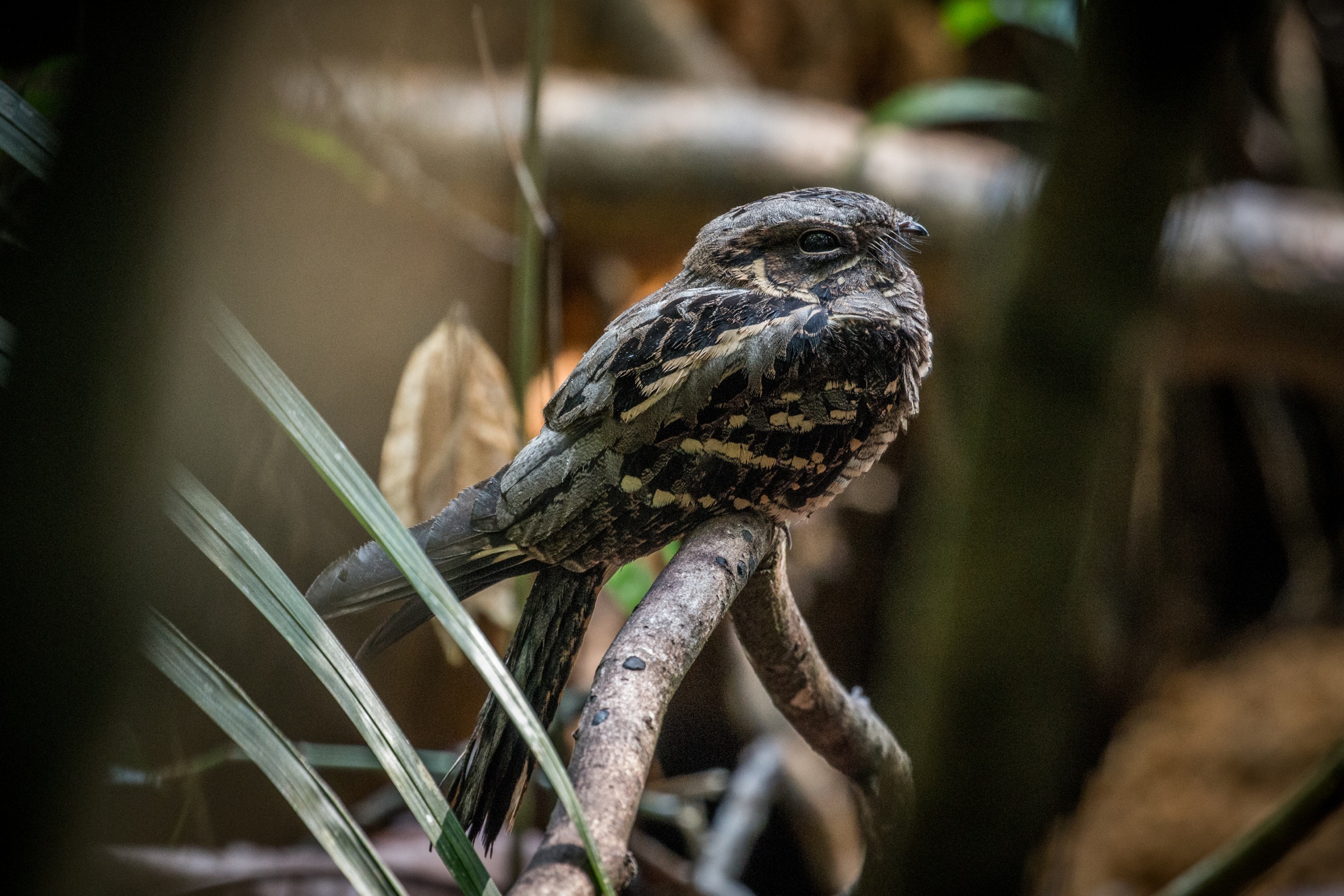 On 8 Jul 2017, 16 participants joined three Toddycats on a Love MacRitchie Walk along Venus Loop. While discussing the conservation issues surrounding the proposed Cross Island MRT Line, the keen-eyed participants kept a lookout for creatures along the forest trail. Even the most well-camouflaged animals revealed themselves! What seemed like a woody stump turned out to be a Large-tailed Nightjar (Caprimulgus macrurus) trying to take a snooze! There was also a really hairy caterpillar that seemed to blend into the tree trunk if you looked at it from the top. In the tree canopy, we would not have spotted the Blue-crowned Hanging Parrot (Psittinus cyanurus) if it had not been dropping starfruit bits as it feasted. It looked so much like a leaf! 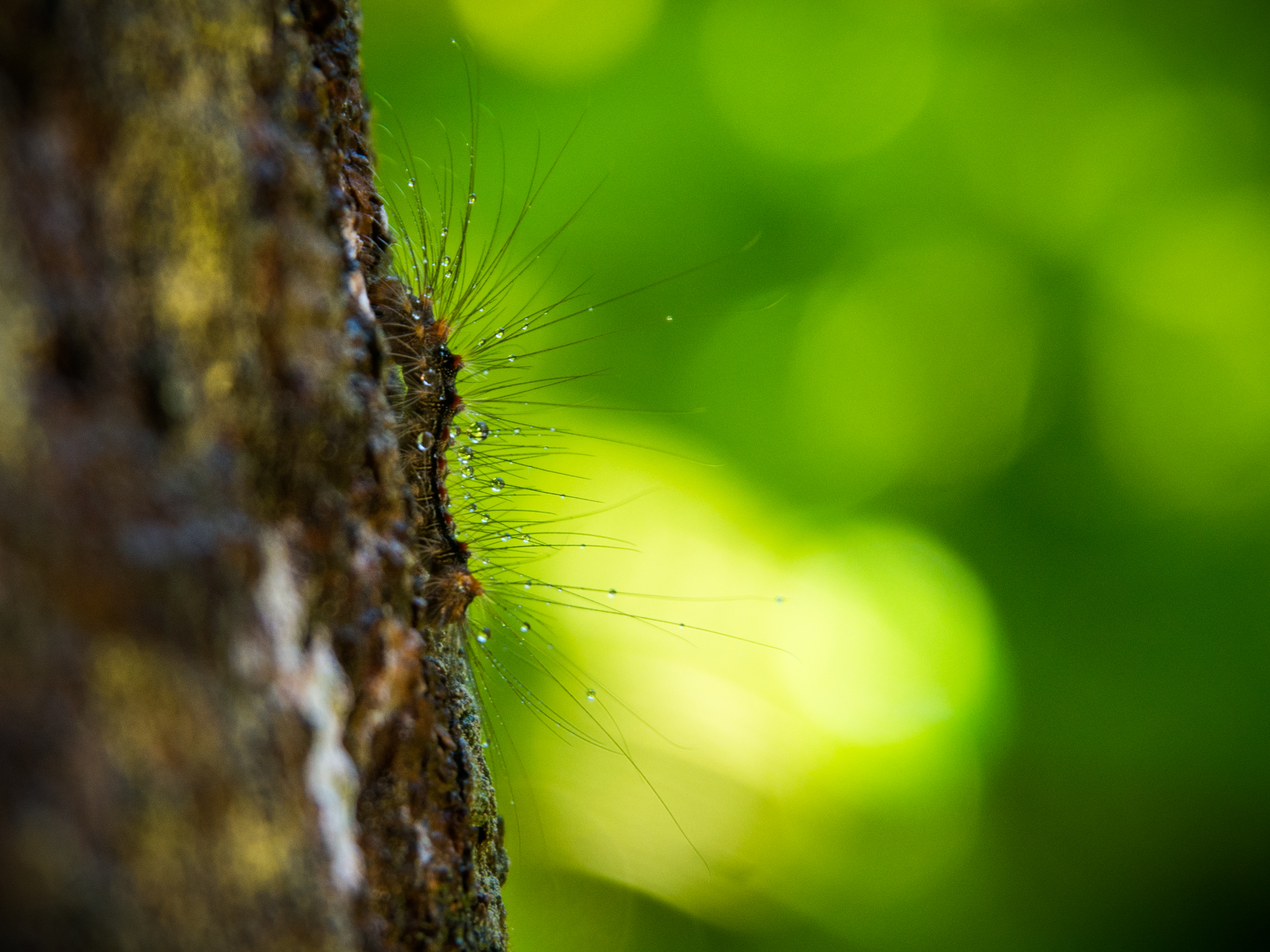 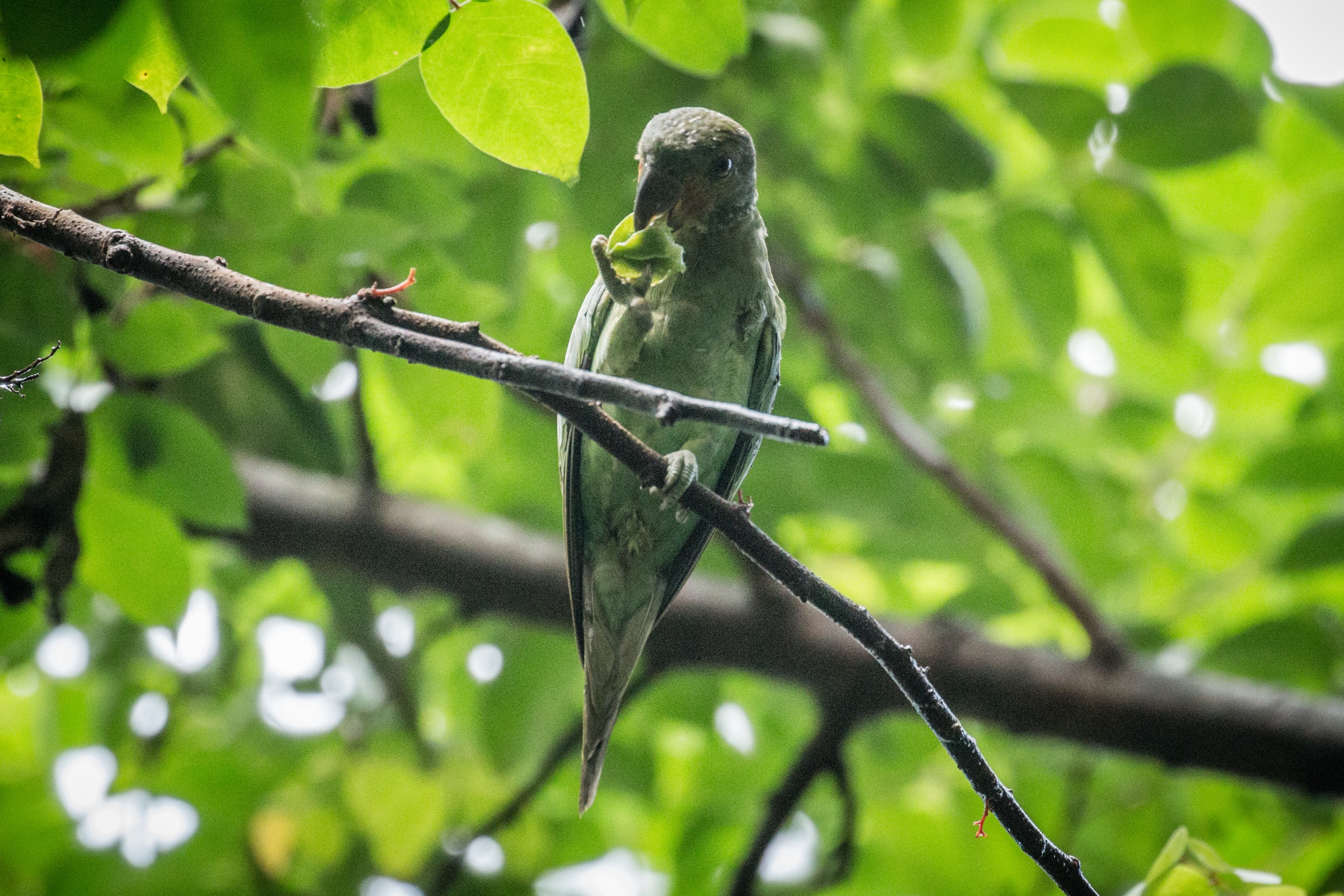 There were also some brilliantly coloured creatures that never fail to catch our eyes. Before we even hit the trail, a Scarlet-backed Flowerpecker (Dicaeum cruentatum) was gorging on a breakfast of Senduduk (Melastoma malabathricum) fruits. It must have been so hungry because it didn’t mind all the people standing barely a metre or two away, snapping away with their smartphones! Nearby, a beautiful turquoise coloured Common Bluebottle (Graphium sarpedon) was sipping nectar from the Red Leea (Leea rubra). 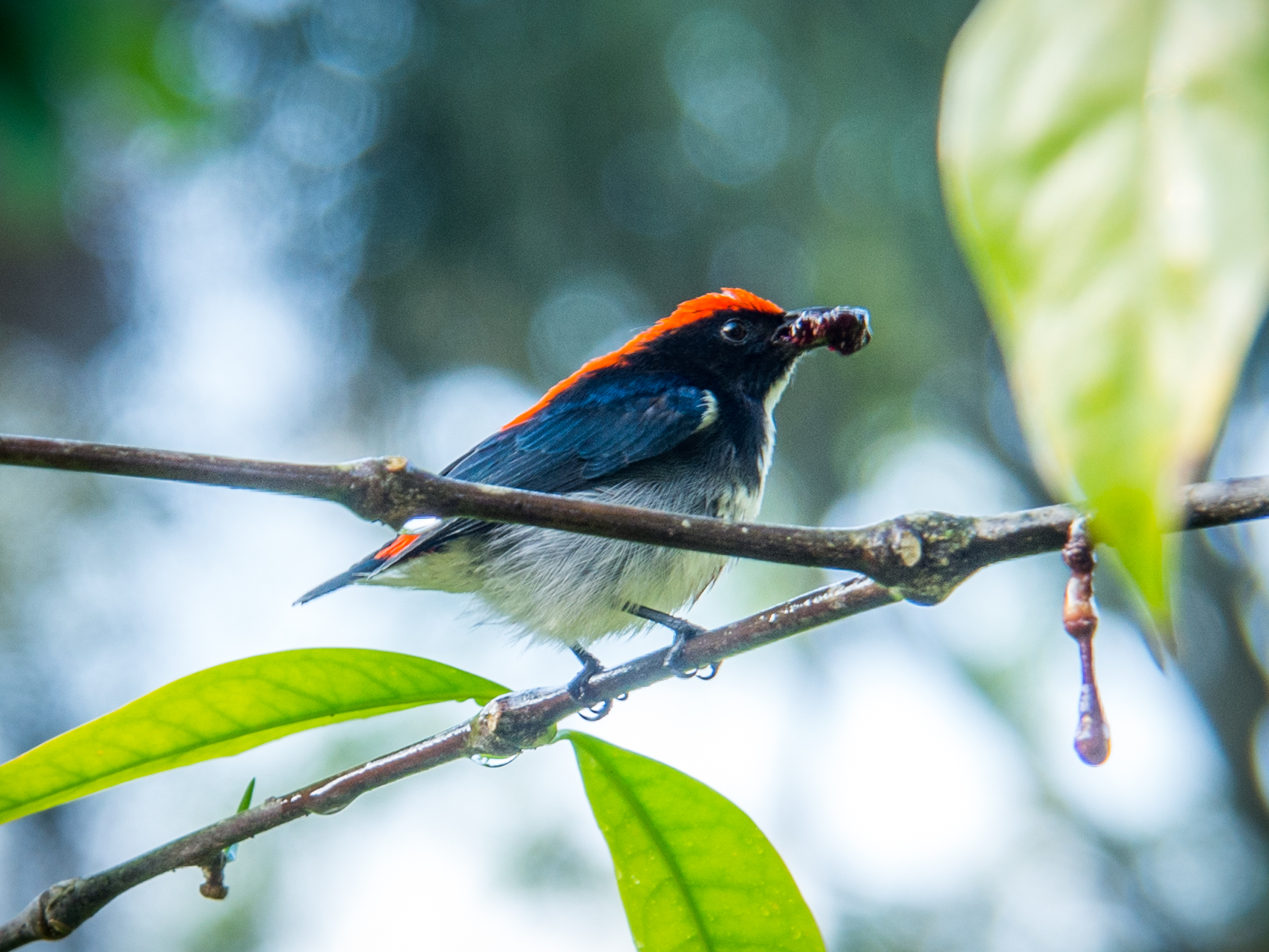 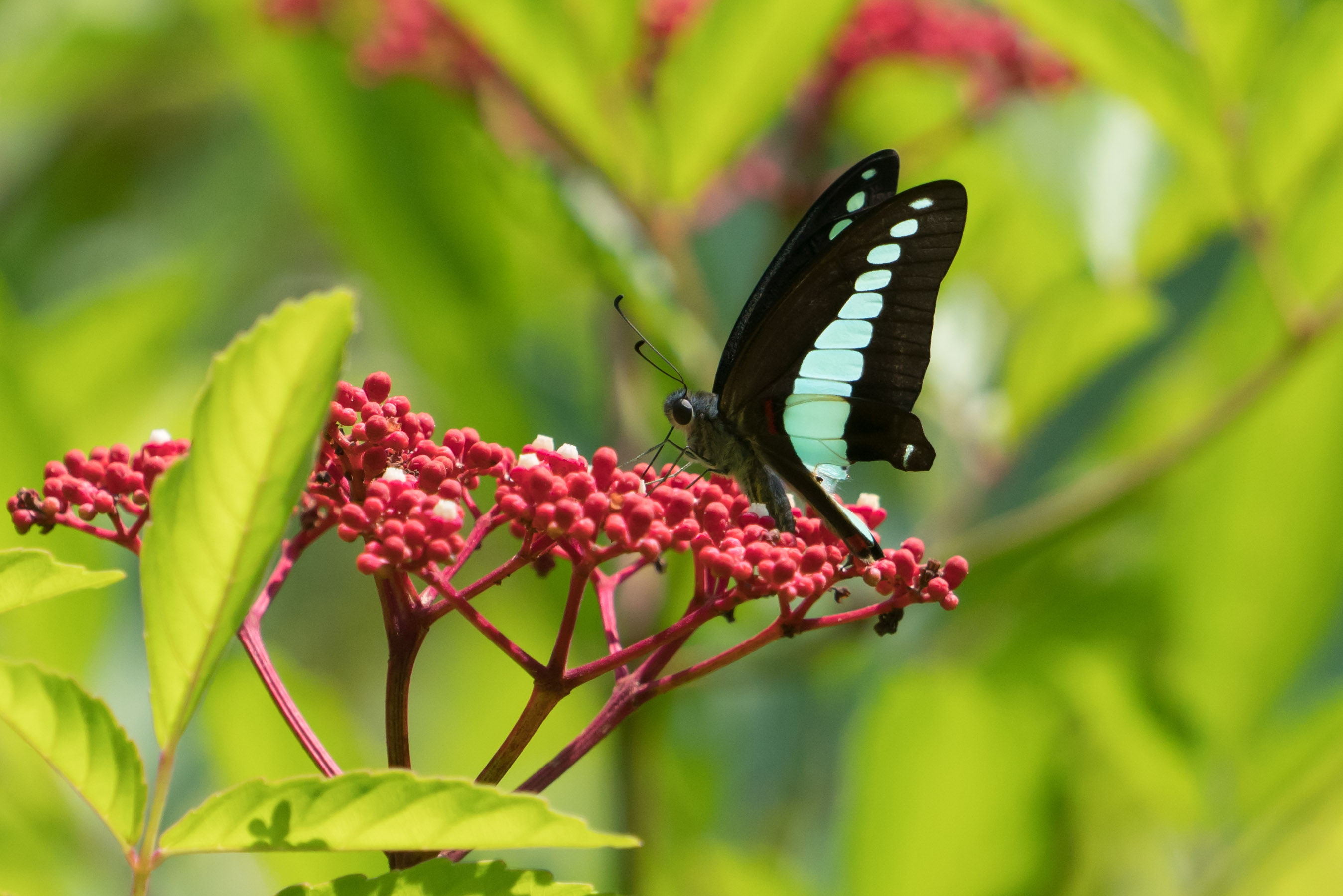 Recently, an unfortunate incident occured in the vicinity of Windsor Nauture Park, where a wild boar (Sus scrofa) injured a woman who was walking her dog. NParks has erected advisory signs around the park, and everyone should read them as earnestly as this young participant did! The signs read: “Wild boars have been seen in the area. If you encounter a wild boar, move calmly away from it. Do not use flash photography as it may upset the animal. Do not feed it as it is illegal to feed wild animals.” 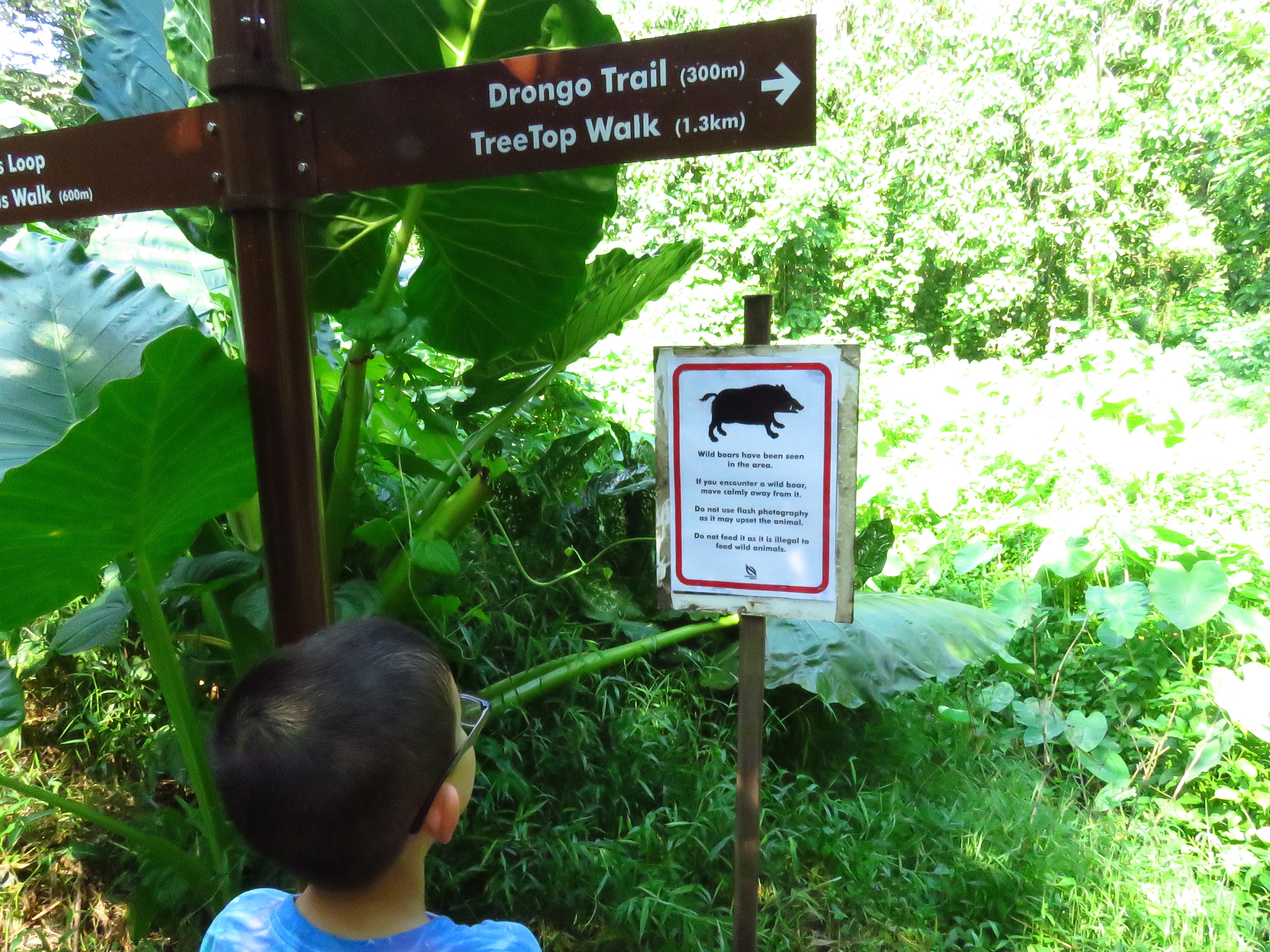 The little ones who joined the walk had lots of fun trudging along the dirt trail and letting their imagination run wild!

Waiting to be teleported to another realm. Photo by Chloe Tan.

Everybody learned new things on this fun-filled walk. We shared our passion for nature in different ways, be it through photography, nature education or simply loving the great outdoors. Let us do what we can to help conserve Singapore’s Nature Reserves for the generations to come! 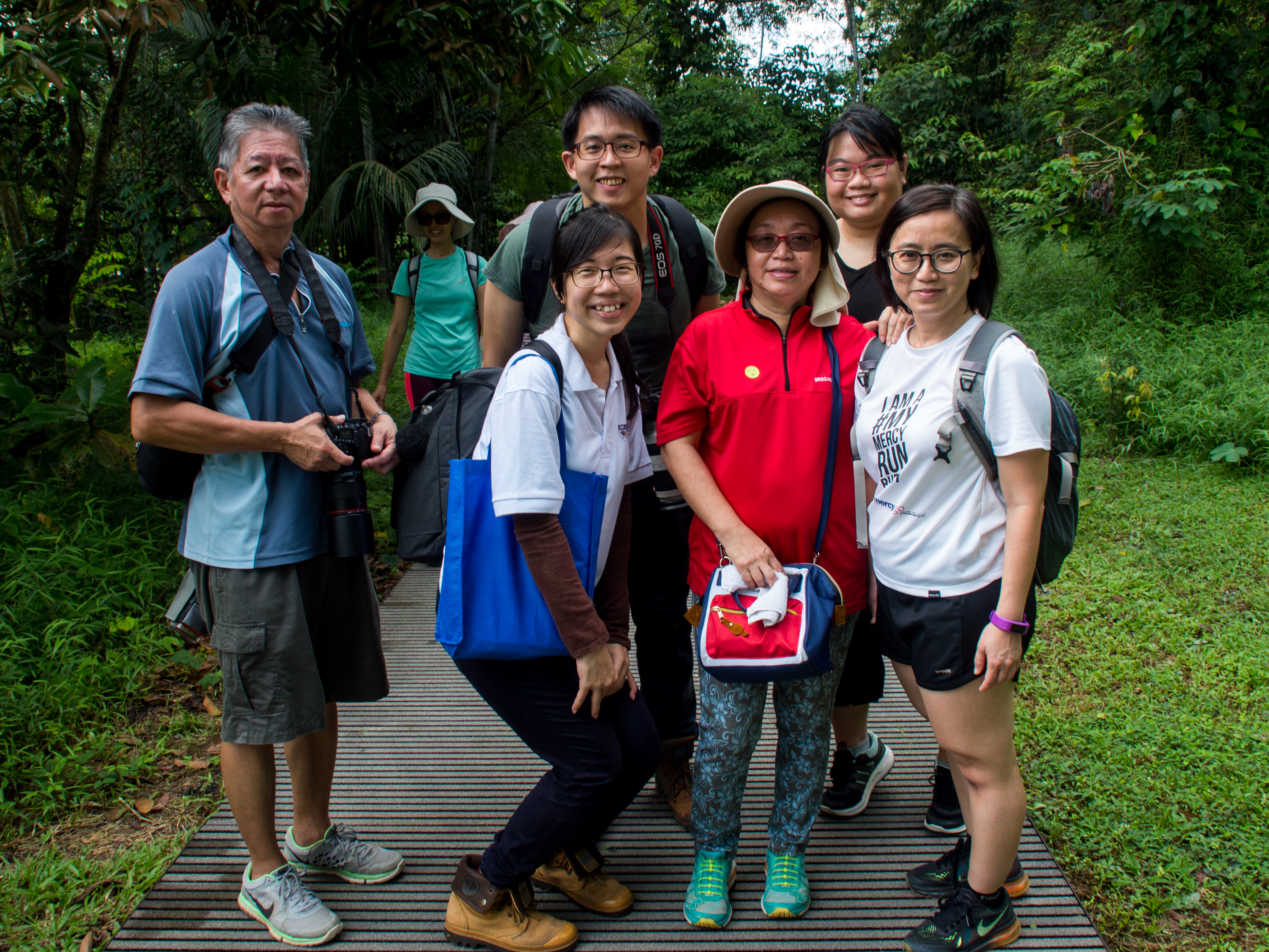 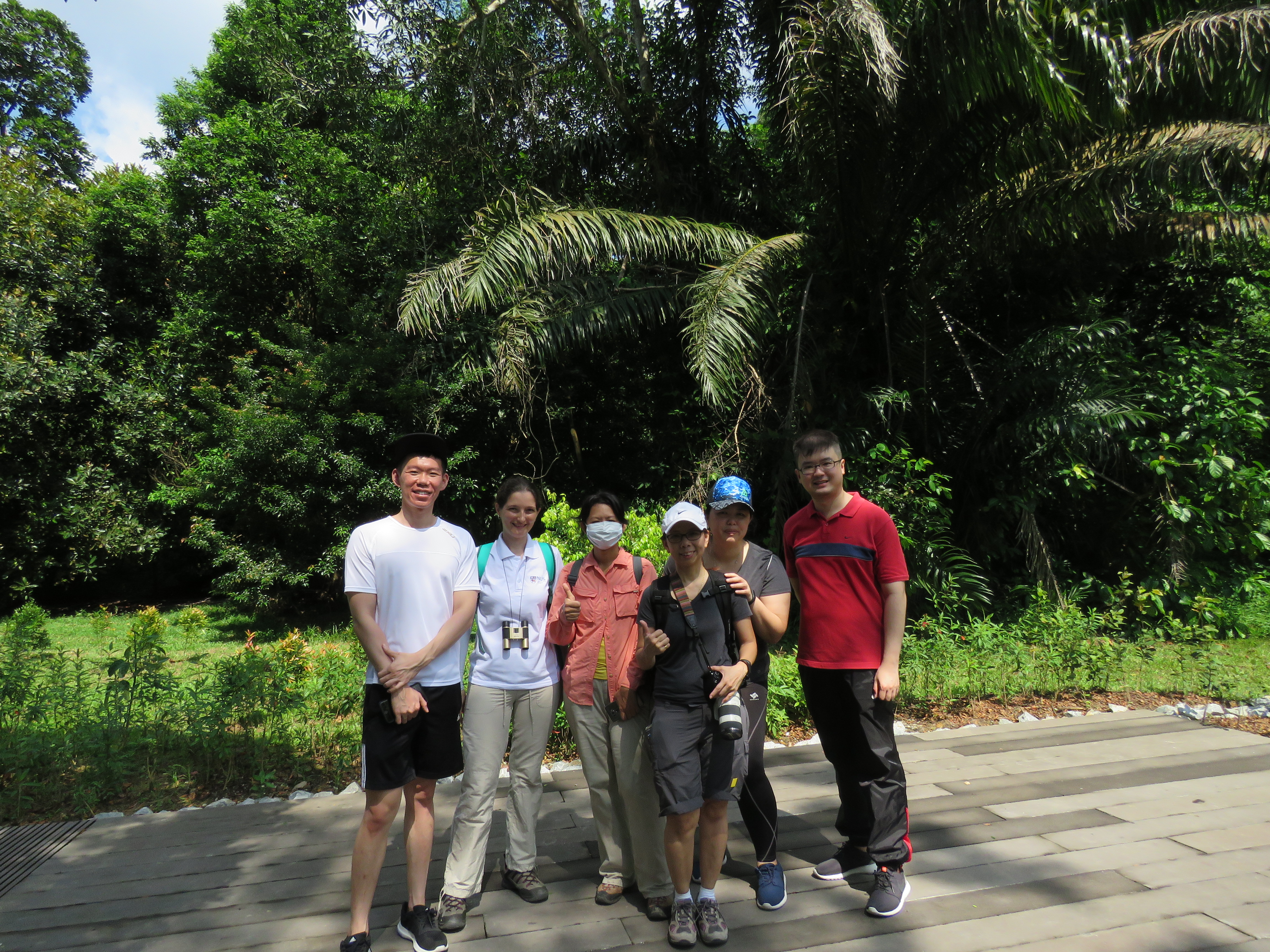 Group 2 with their guide, Claire Jonquieres (second from left). Photo by Joyce Wong. 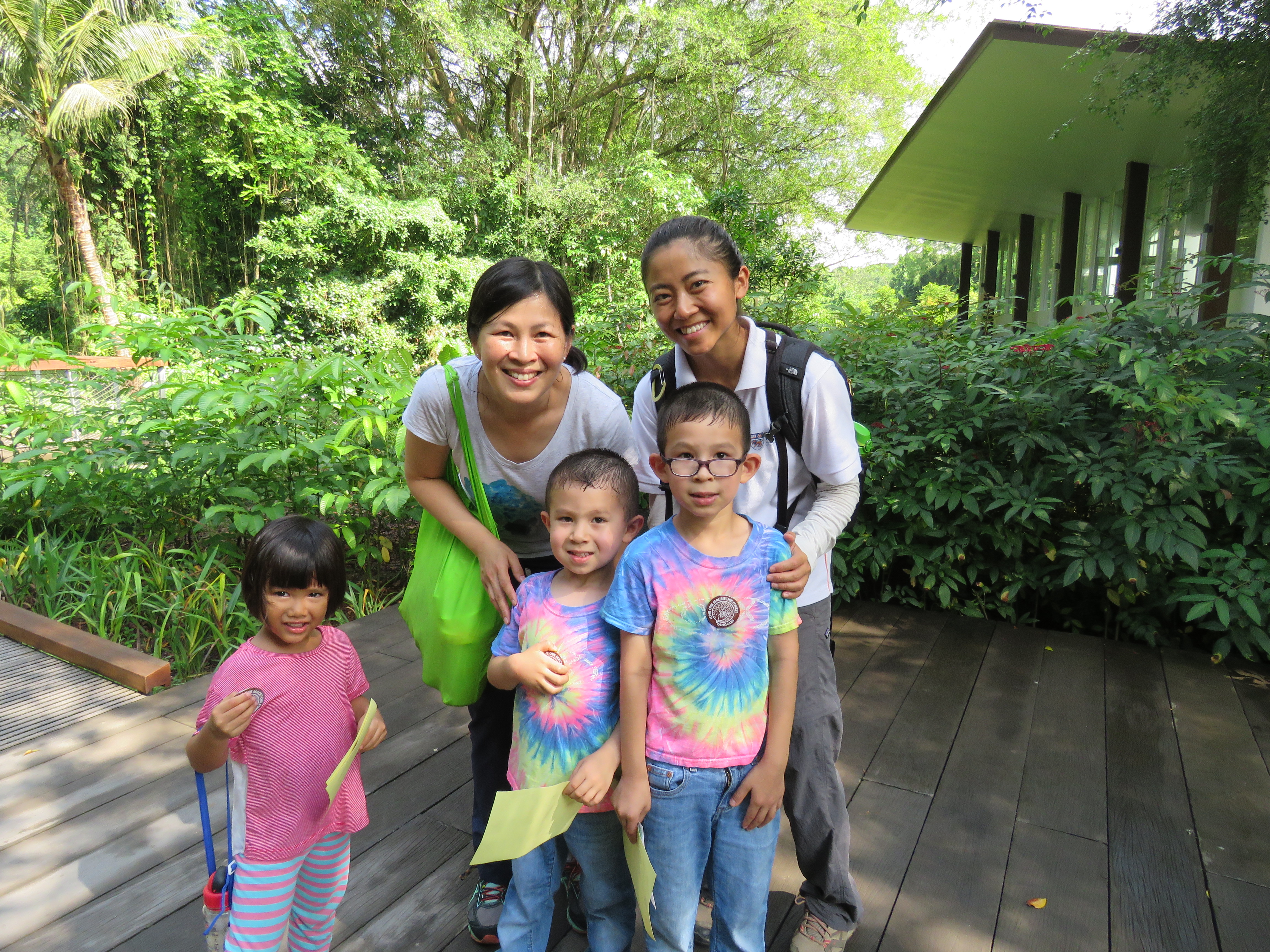 Group 3 with their guide, Chloe Tan (back row, right). Photo by Chloe Tan.

Find out more about the Love MacRitchie movement here. See more photos of the walk on Facebook.

Posted on Monday, 19 June 2017 by chloetanyiting | Leave a comment 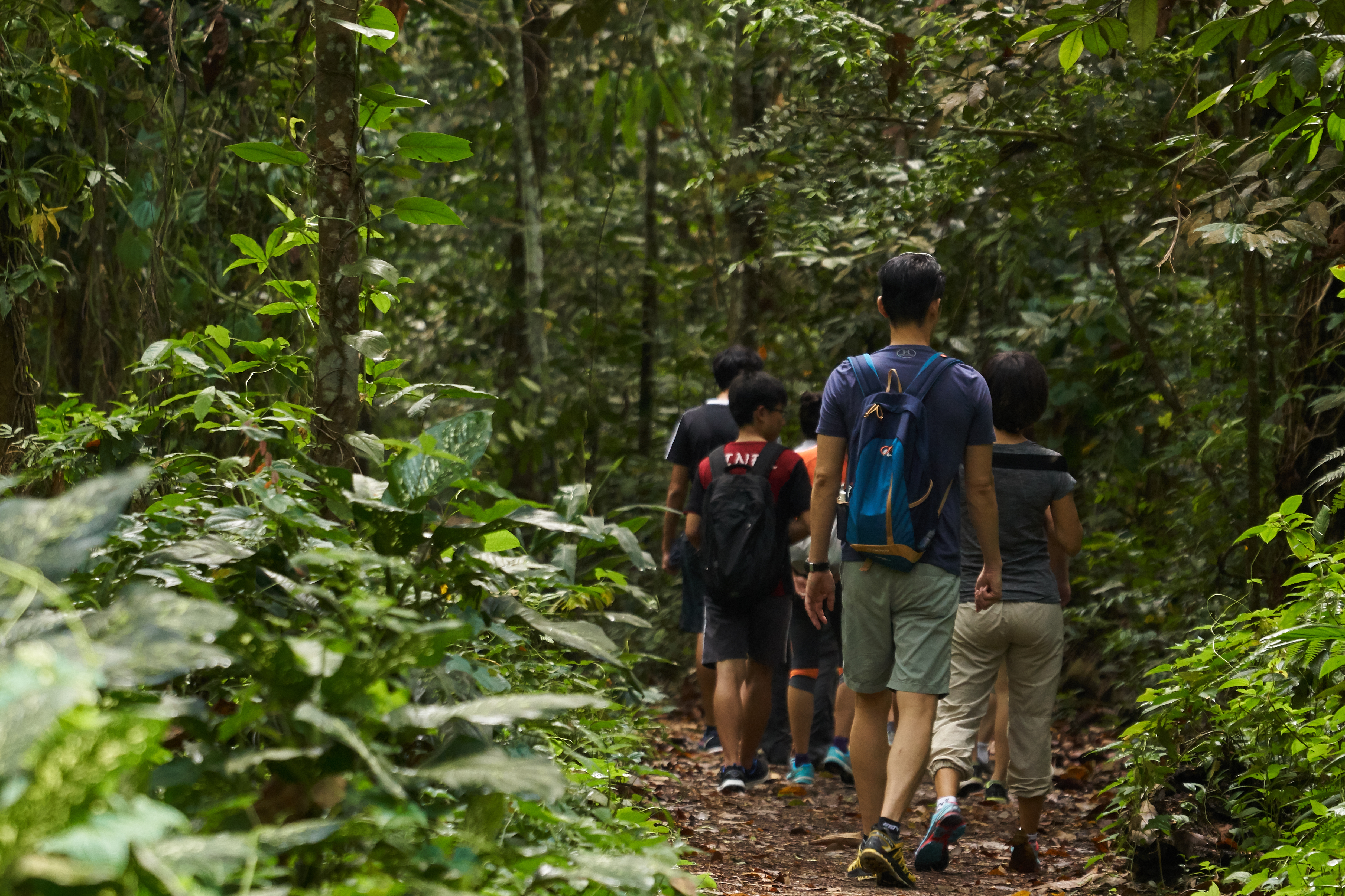 A pleasant walk through the shady forest. Photo by Jensen Seah.

It had been a week of scorching hot weather so a walk through the shady forest was a much welcomed respite from the urban heat. Three Toddycats and 18 participants turned up at Venus Loop on 11 Jun 2017 to observe the wildlife in MacRitchie Forest and discuss the conservation issues surrounding the proposed Cross Island MRT Line.

The animals in the forest were going about their usual activities and we got to observe them really up close! There was a jumping spider was hopping around a plant, probably hunting for its breakfast. We got to see its huge pair of forward-facing eyes that helps it judge distance better so it can accurately pounce on its prey. A Common Flashwing damselfly (Vestalis amethystina) was basking on a sunny spot at our eye level, its purple wings shimmering beautifully. One group also spotted a headless Golden-spotted Tiger Beetle (Cicindela aurulenta)! We wonder who the gruesome predator was. 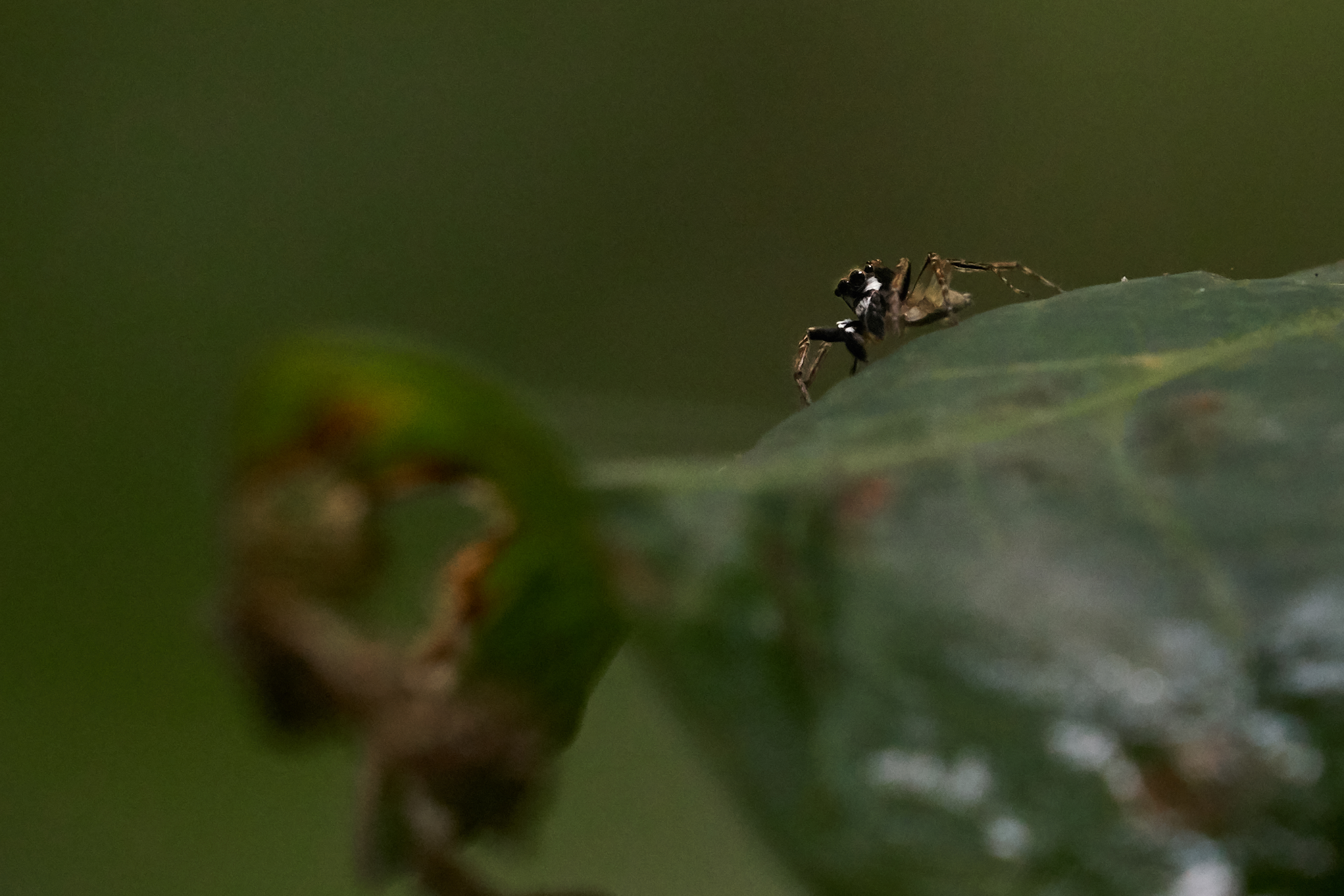 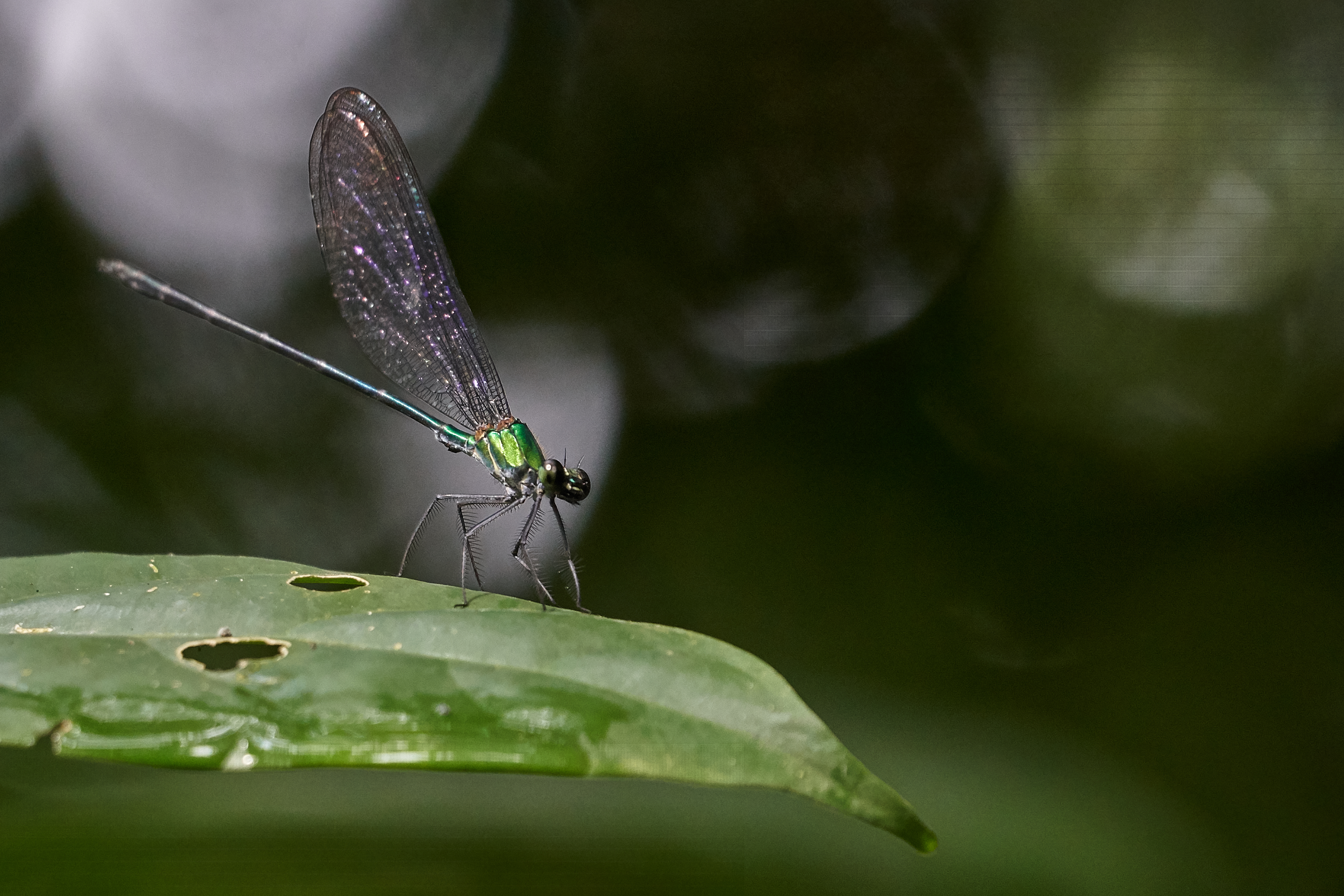 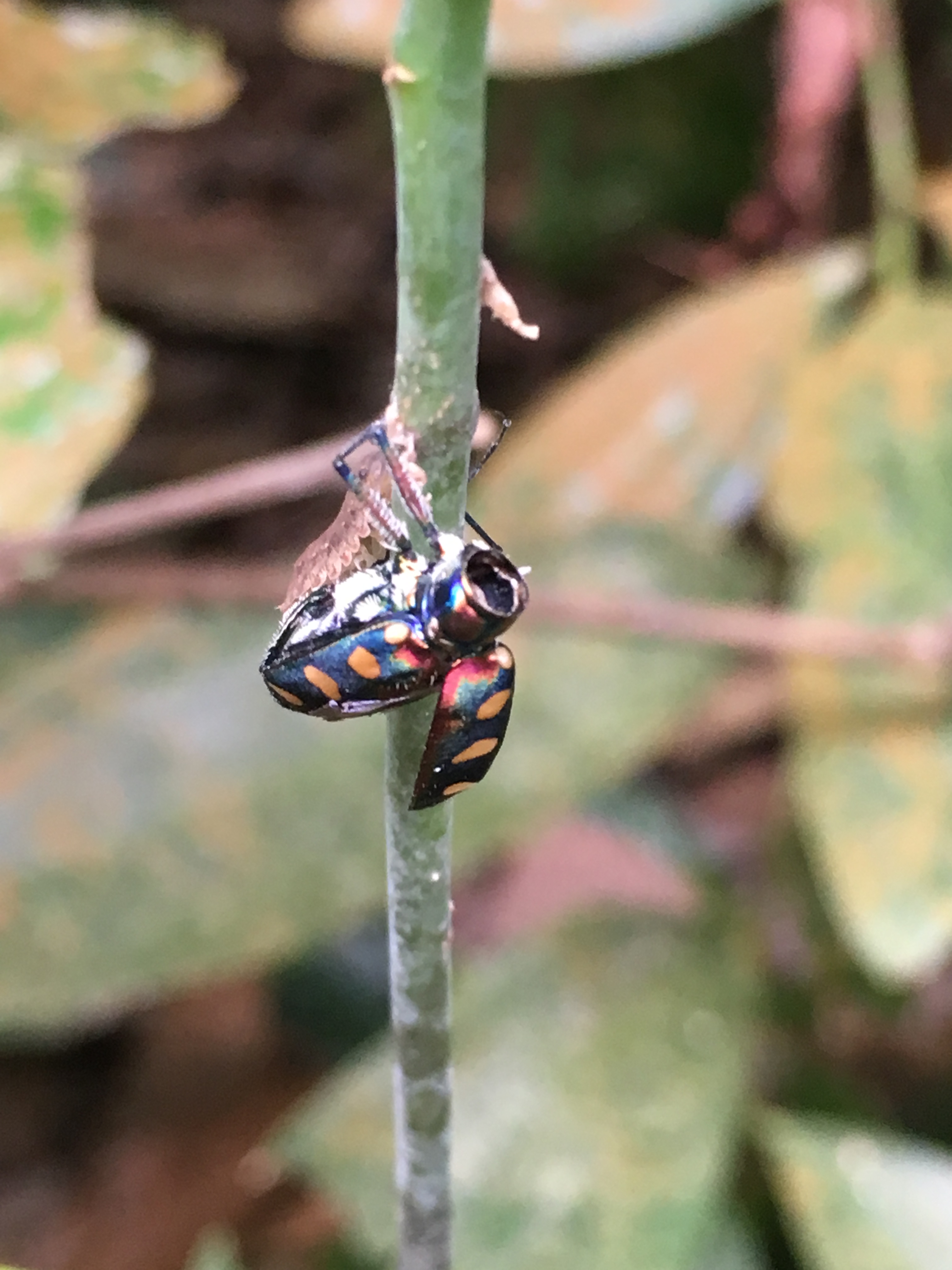 The birds also came out to play. A Dark-necked Tailorbird (Orthotomus atrogularis) came unusually close to the trail, prancing about the foliage. There was a Greater-racket Tailed Drongo (Dicrurus paradiseus) that was singing at the top of its funky metallic voice too! 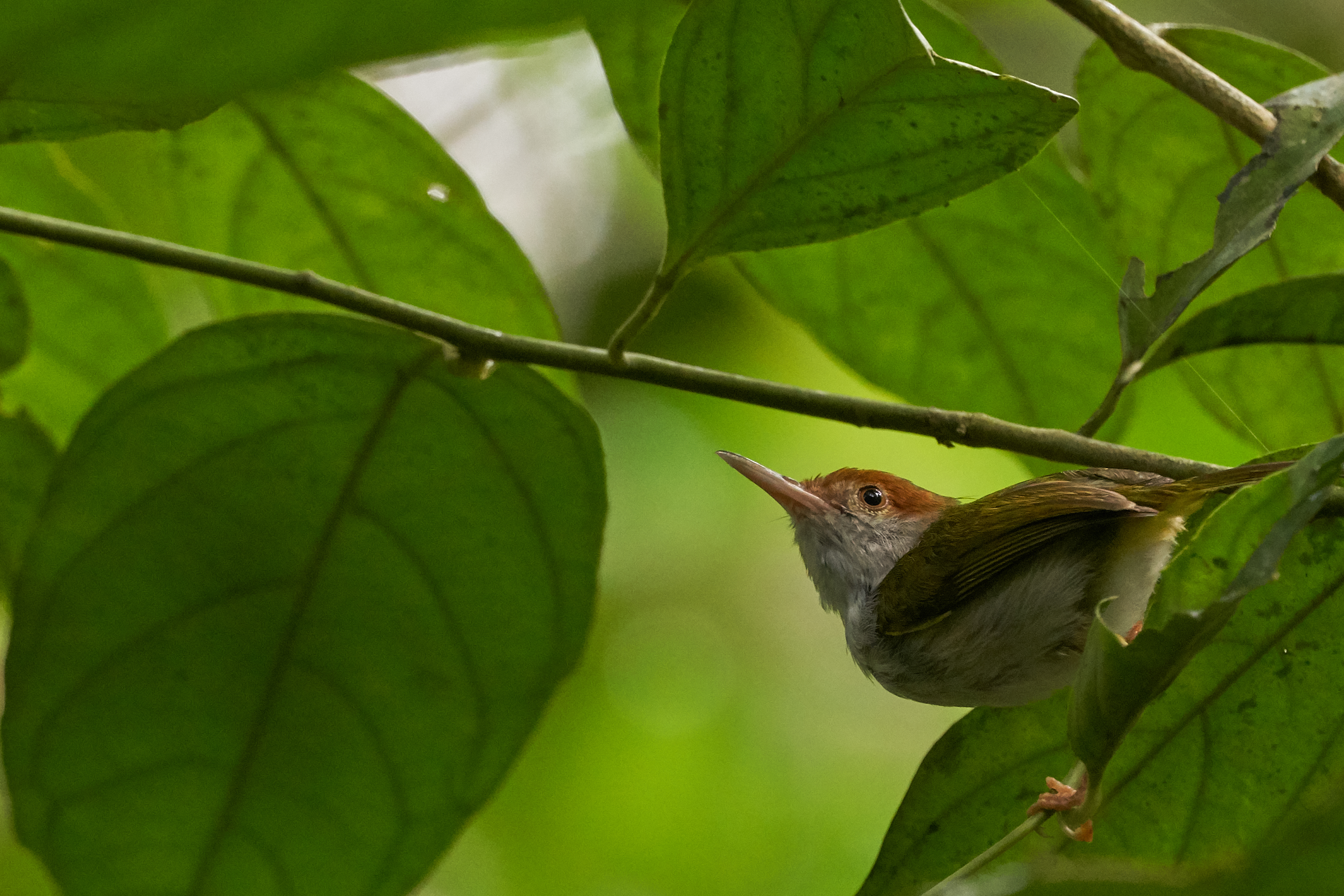 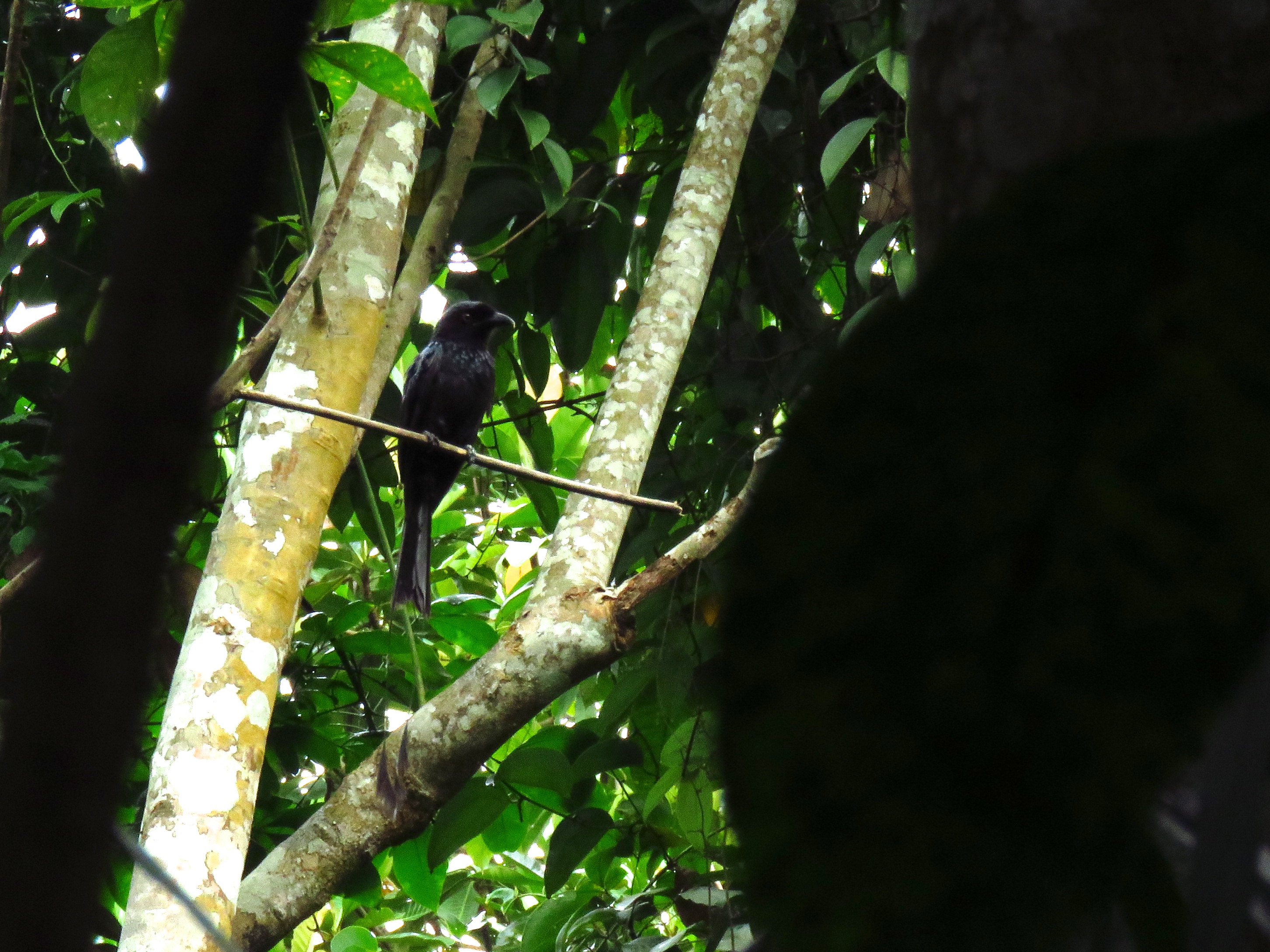 Some of us saw a leaf-like object glide across the trail and perch on a dead tree trunk. Upon a closer look, it turned out to be a Black-bearded Gliding Lizard (Draco melanopogon)! A handsome male was showing off its black throat flap, possibly in an attempt to get the attention of a female that was on the same trunk. Nearby, a Plantain Squirrel (Callosciurus notatus) was very busy collecting nesting materials. 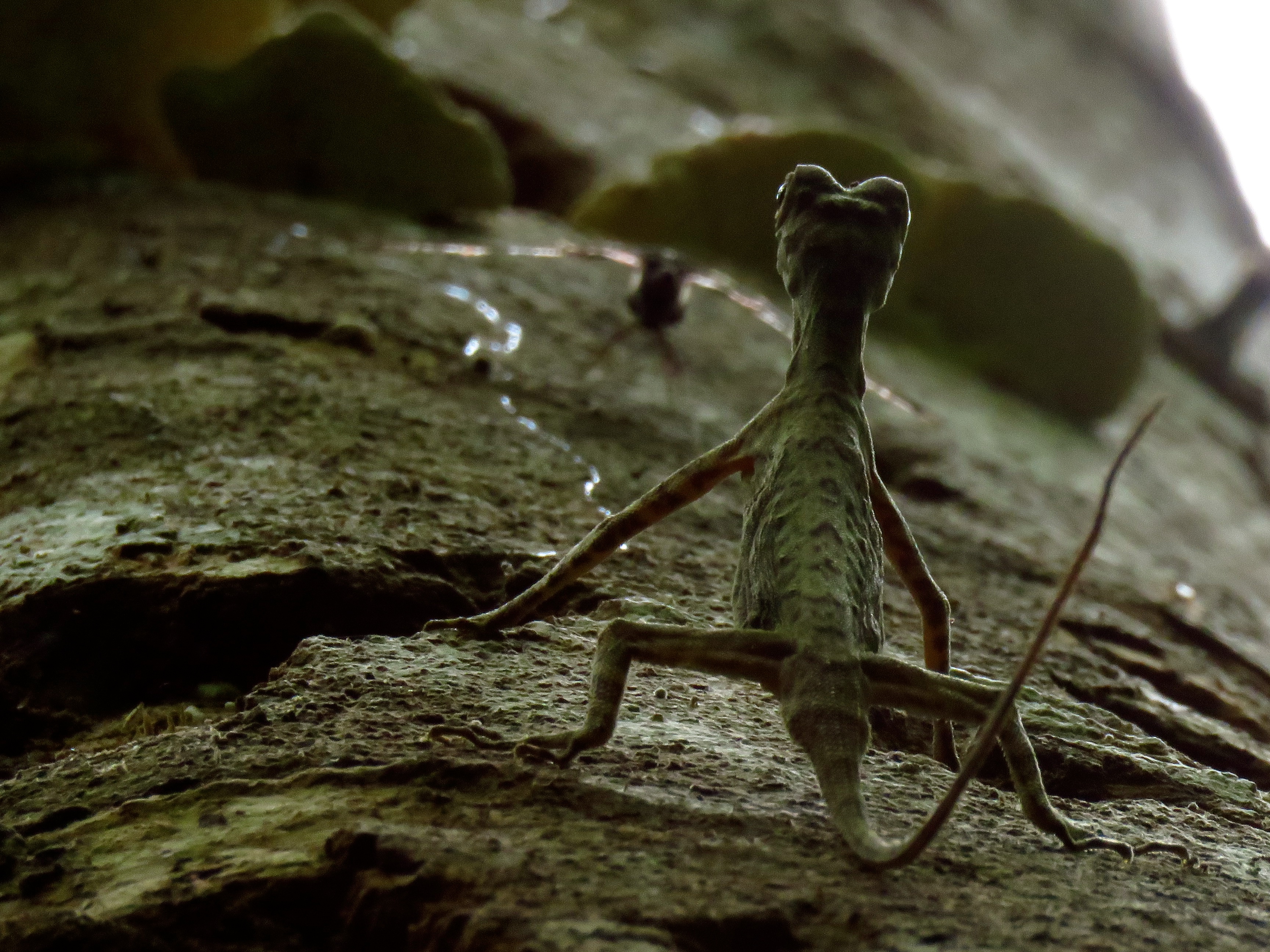 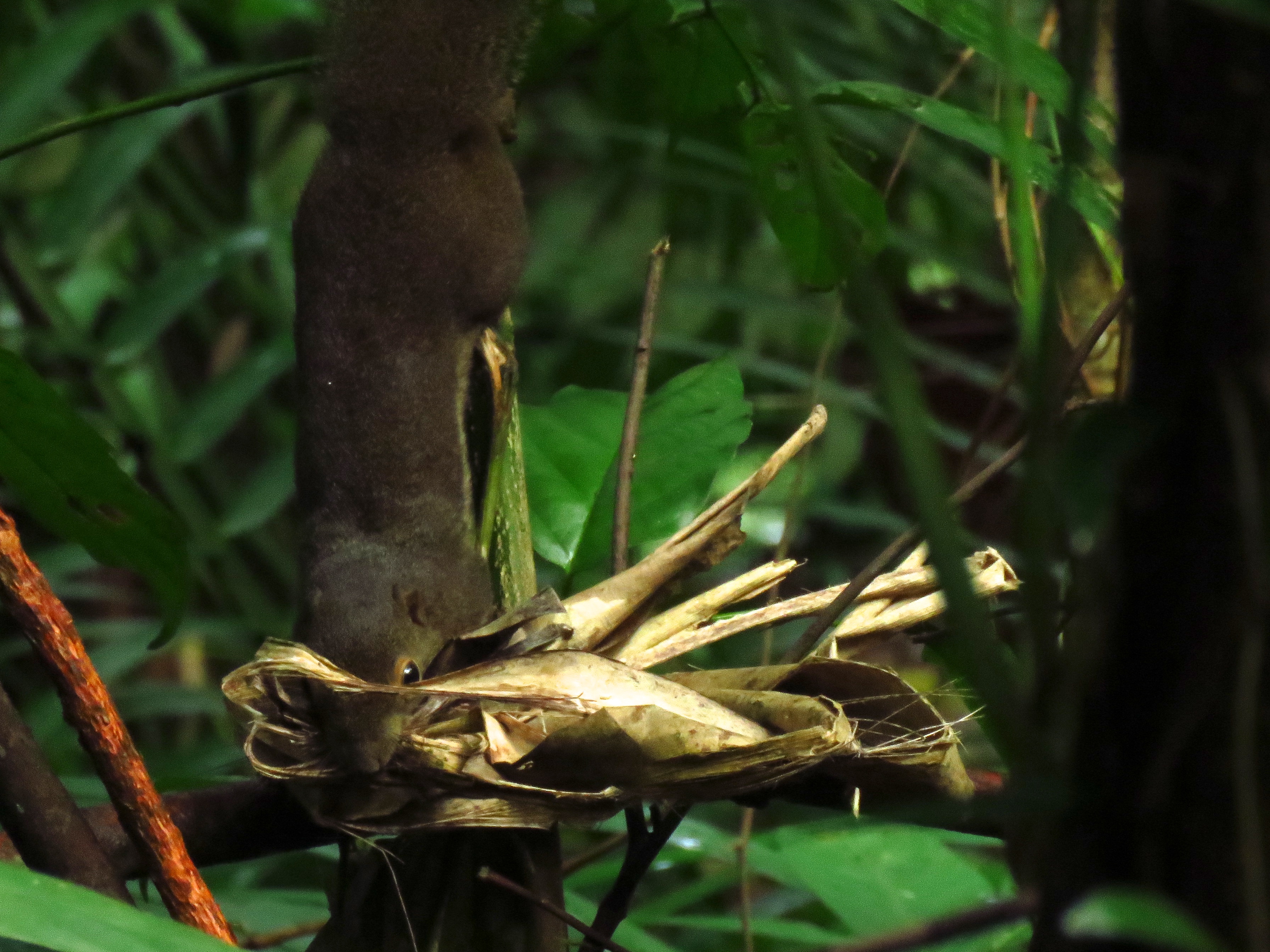 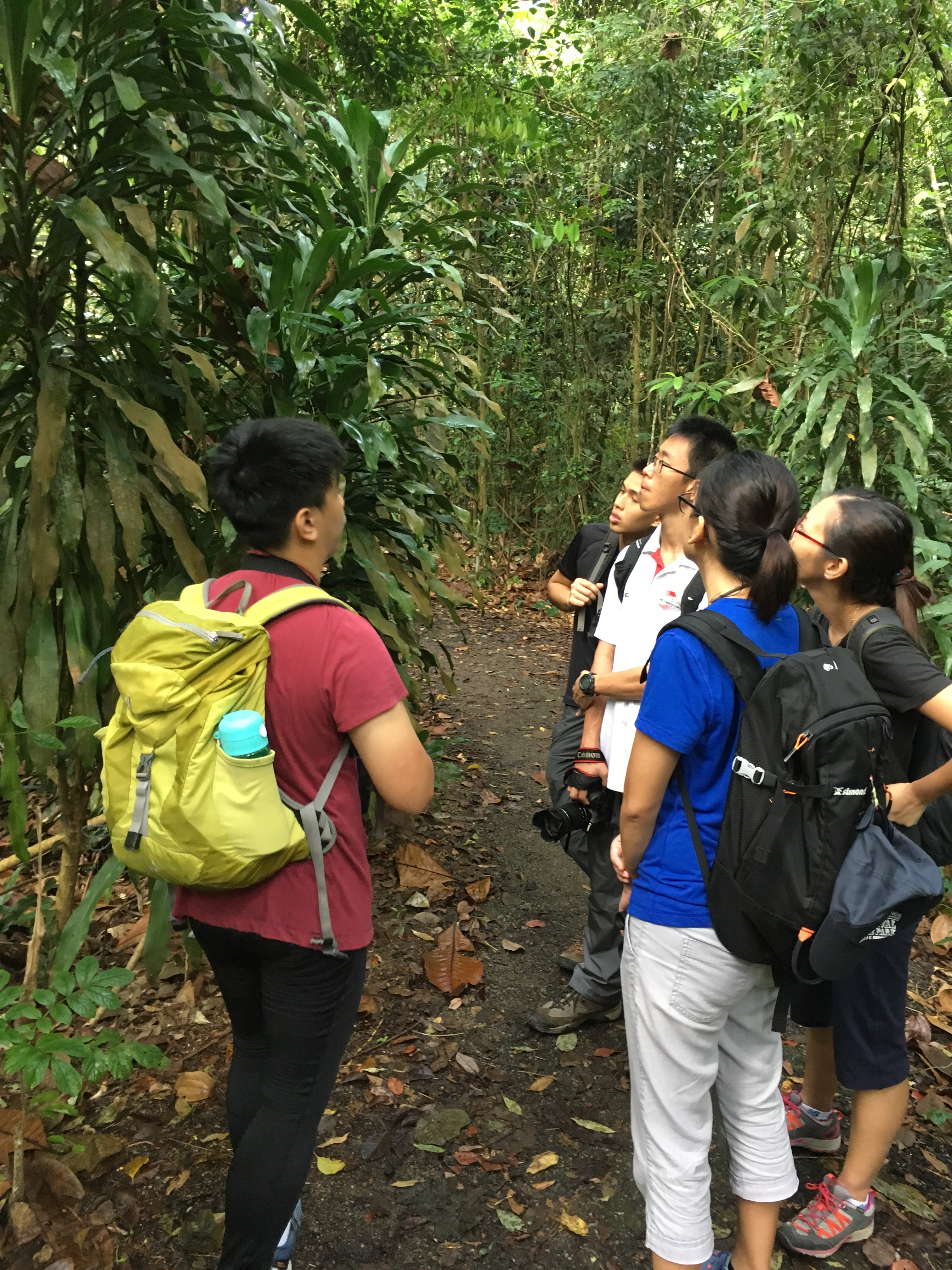 Tak Wei from BES Drongos does some sharing. Photo by Joleen Chan.

On this walk, we felt with our own skin the profound importance of forests in climate regulation. Our biggest lesson of the day was that we depend on the forests of our Nature Reserves as much as the animals do! A big thank you to the guides and participants for the lovely morning adventure! 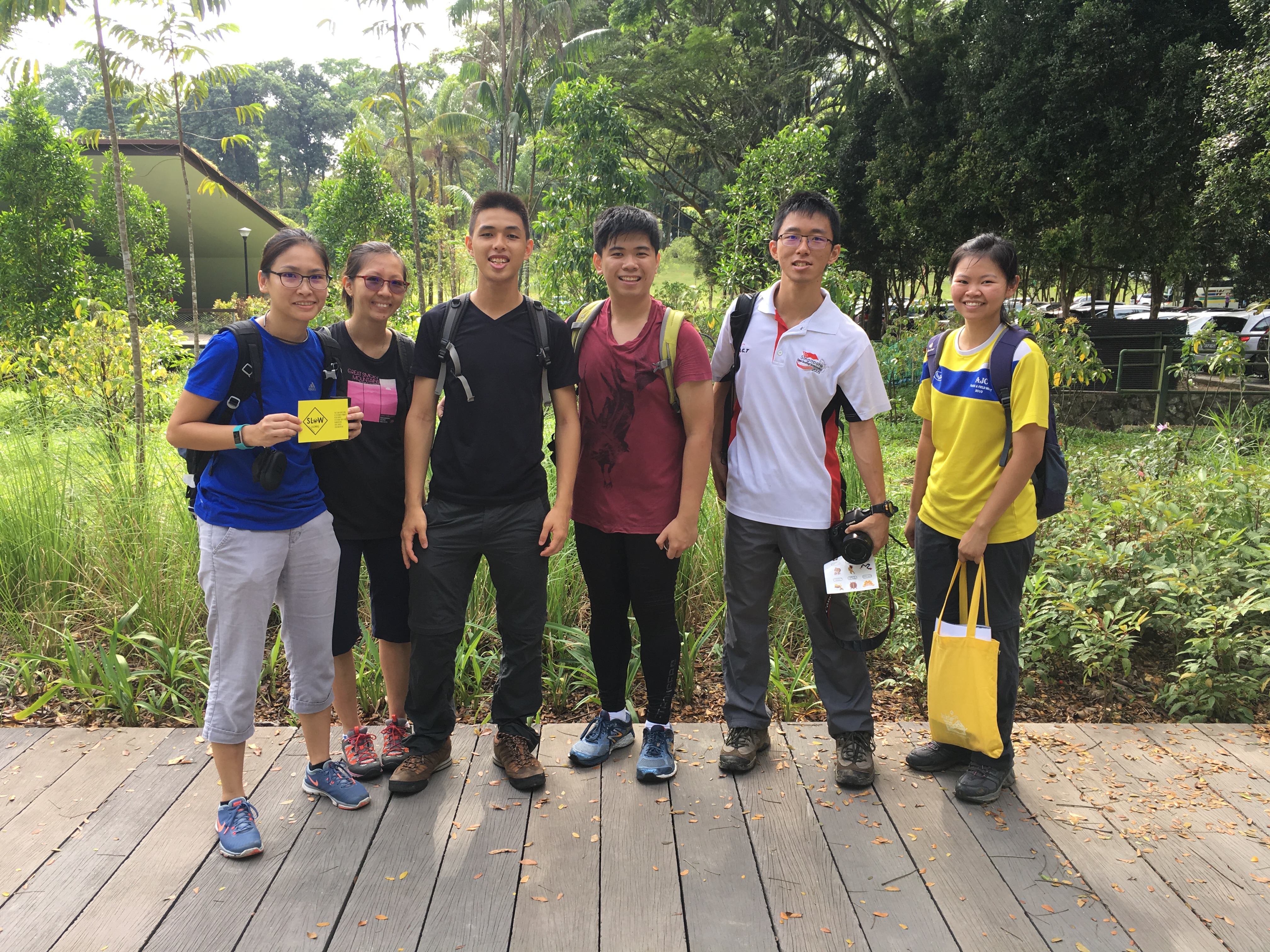 Group 1 with their guide, Joleen (on right). Photo by Joleen Chan. 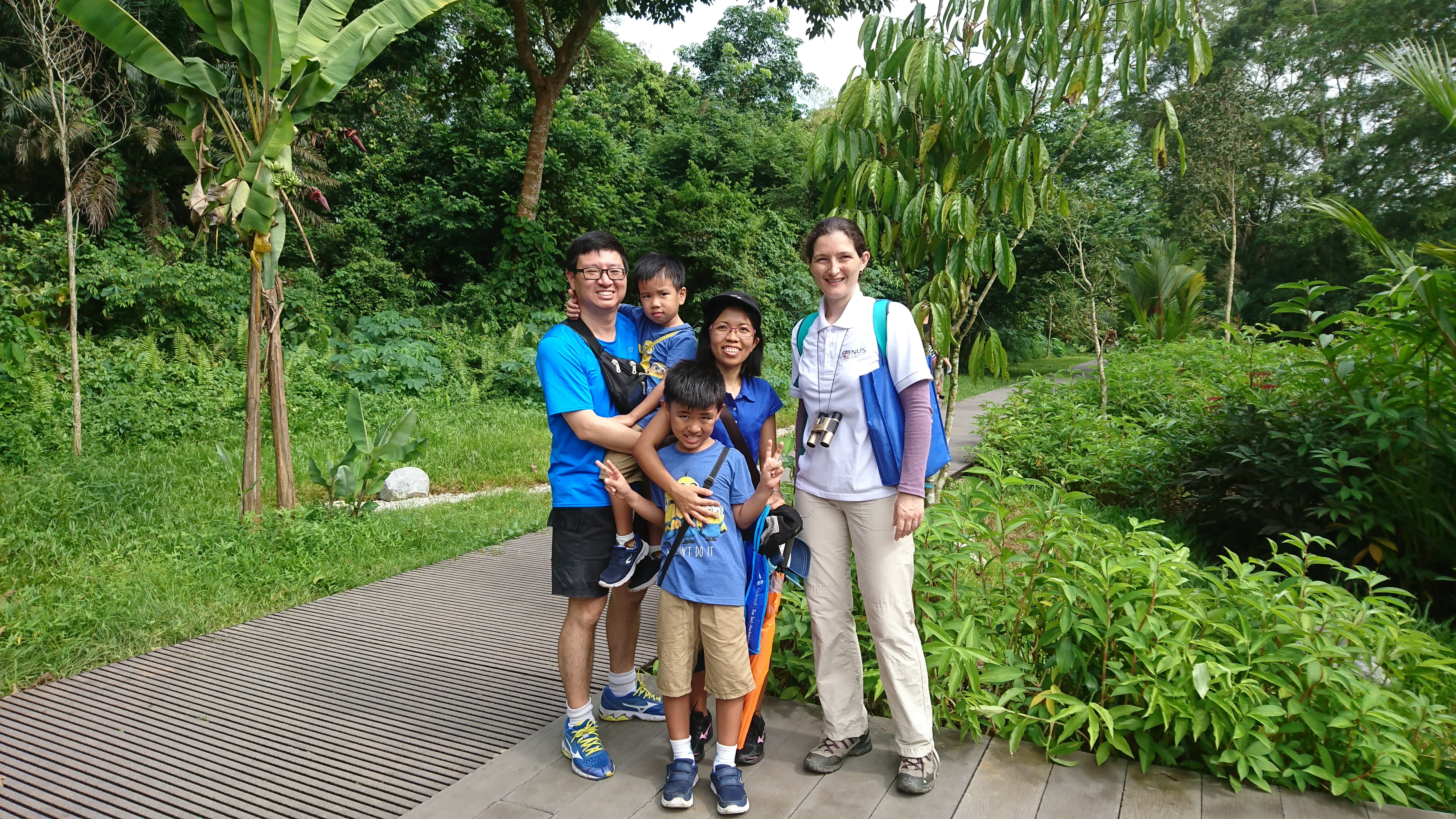 Group 2 with their guide, Claire (on right). Photo by Claire Jonquieres. 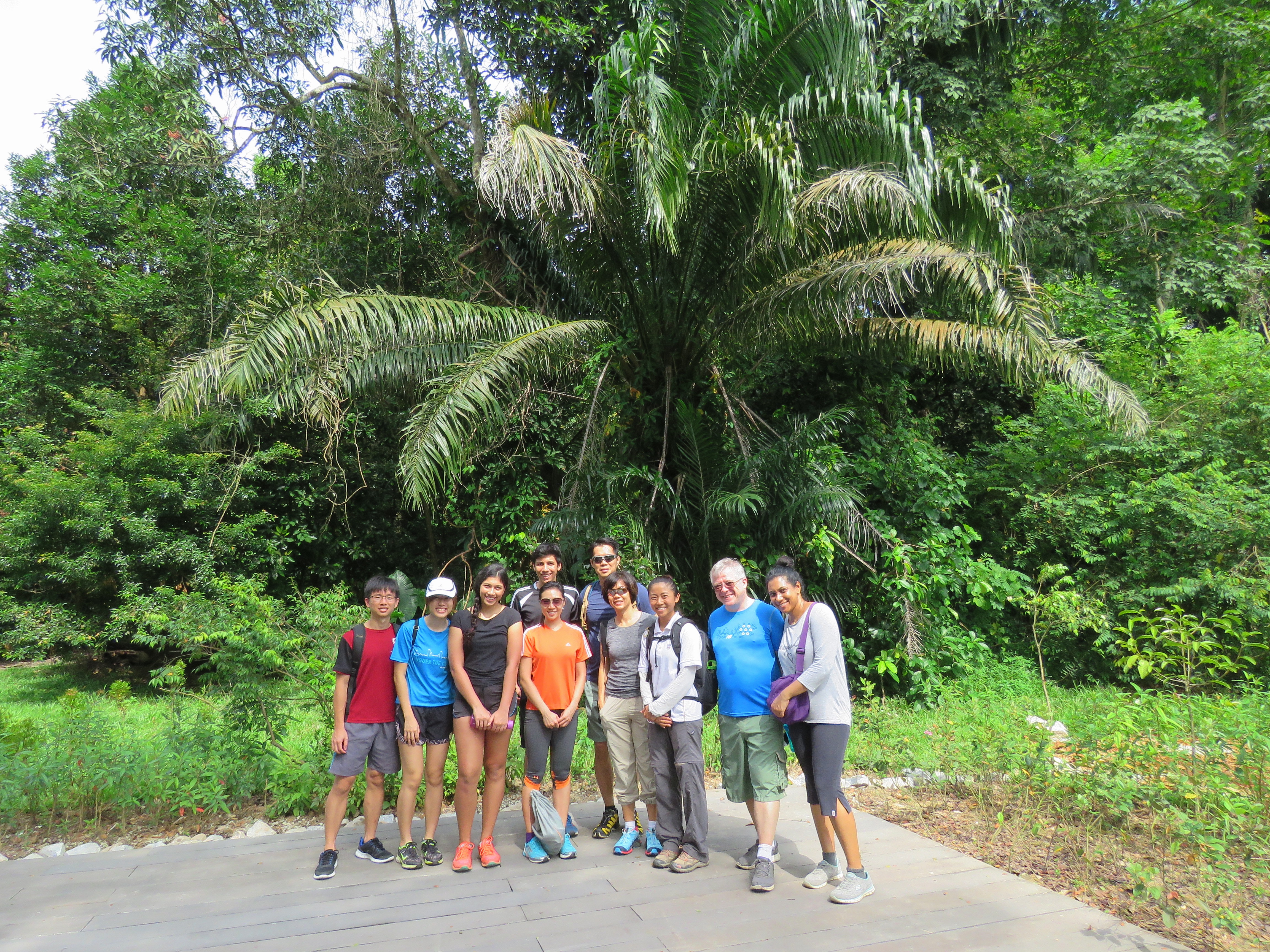 Group 3 with their guide, Chloe (third from right). Photo by Chloe Tan.

Find out more about the Love MacRitchie movement here. See more photos of the walk on Facebook or Flickr. 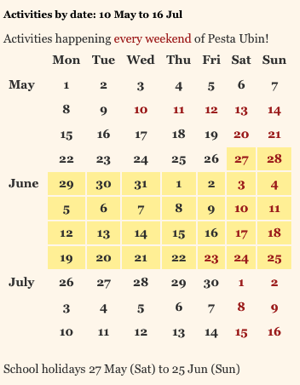 Pulau Ubin is going to be abuzz from 20 May to 16 July 2017! Volunteers from some 20 organising nature and heritage groups have come together to offer a slew of Pesta Ubin activities.

Many Pesta Ubin activities are offered free of charge to members of the public. You may not even need to register for some – just join in the fun once you are on Pulau Ubin! Check the blog to see what is happing by date and activity type – something is going on EVERY weekend during this period.

NUS Toddycats are supporting the Balik Chek Jawa event and a Pedal Ubin ride for sure! 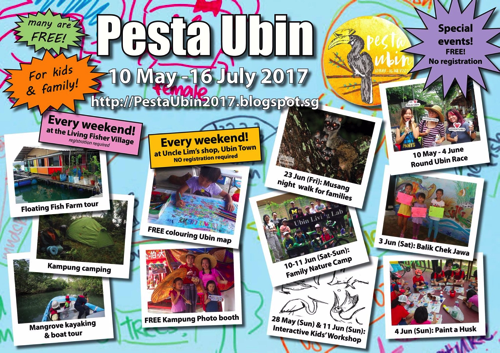 Just some of the people behind Pesta Ubin! 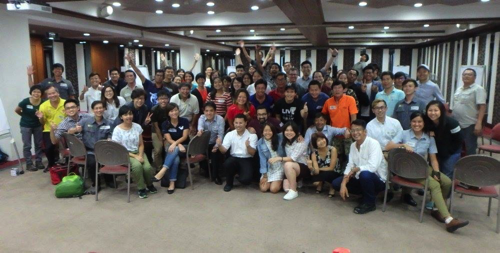